Shatter-proof film (also called security film, anti-shatter film or blast proof film) is a thin but very strong clear film that can be applied to the inside surface of existing windows to provide a strong barrier against pirates or forced entry. This film is NOT bullet proof.

Can windows be made ‘bullet proof’? The answer is yes, but to make a window bullet proof requires special glass that is typically 50mm thick. In most cases existing windows cannot be replaced by bullet proof windows, due to the high cost or practical considerations of the depth required, or the optical clarity (for instance on a ships bridge that needs excellent optical characteristics for navigation).

In order to ‘harden’ existing windows, a strong security film is applied to the inside surface of the window, this can provide protection in the following ways;

- Bullets – these will pass through the glass, but the film will hold the window together that prevents glass shattering and damaging nearby personnel. It also maintains the window integrity to prevent entry and also keeps weather out that could cause expensive damage.

- Forced entry – trying to smash a window fitted with security film is very difficult, there are different levels of film that provide various protection levels.

- Blast proofing – if there is a blast, the window can be blown out of its frame, causing injury to personnel and allowing entry. It is possible to add blast proof protection by using a special adhesive that bonds the security film to the window frame.

3M security film has up to 40 individual layers to give exceptional strength and tear resistance, their security film is up to 30 times the strength of other “security films”. In addition, it has excellent clarity to maintain visibility through bridge windows. 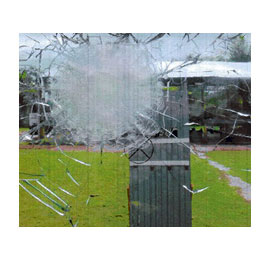